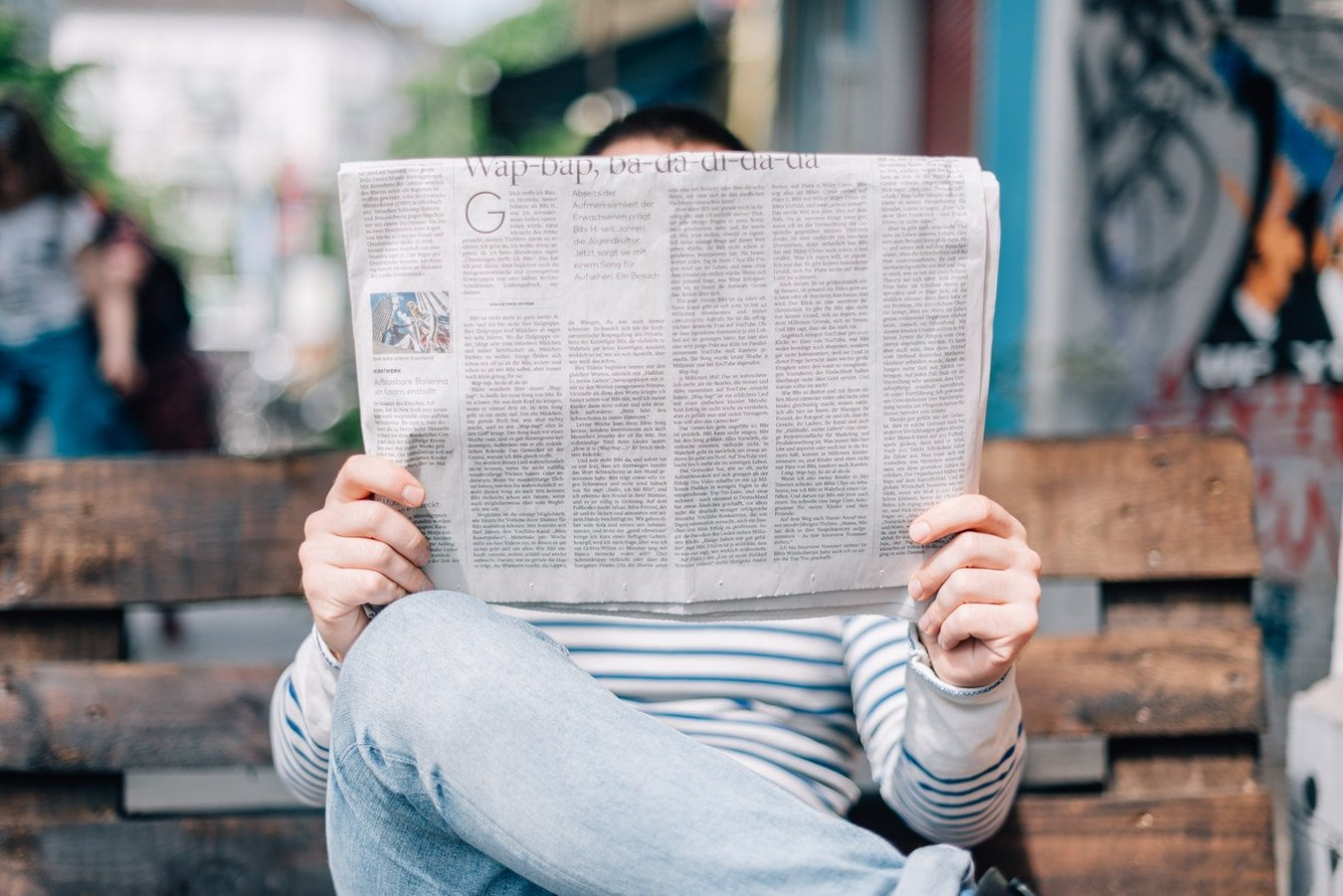 Then you need to learn how to write press releases.

A press release will get your business featured on huge publications with hungry customers eagerly waiting to buy from you.

But, this is easier than done.

Writing a press release that will get picked up by news outlets and explode brand awareness takes skill and strategy.

Luckily I’m here to save you endless amounts of time and energy by teaching you how to write a good press release.

100% of journalists rely on press releases to find new stories, as well.

That means with the right planning, you can have heaps of journalists jumping on your story.

What is a press release?

Let’s start with the basics.

What is a press release, anyway?

Google defines it as:

An official statement issued to newspapers giving information on a particular matter.

Normally you would write a distribute a press release when you:

This keeps the public informed about your business, while also drastically improving brand awareness.

I’ll be touching on press release distribution websites like them later, but look at their website stats:

They have mountains of traffic, authority, and loyal readers.

You’d notice a big leap in traffic and sales.

Don’t you want that?

Of course, you do, and that’s why I’m going to teach you press release writing next.

Now that you know what a press release is, let’s get in the juicy stuff…

Writing press releases that journalists can’t wait to eat up.

I’m going to guide you through all of the steps and formatting rules you need to follow to do so ahead.

Before we dive into any writing strategies, you need to learn the fundamentals of formatting a press release.

This will ensure it’s in perfect condition before sending off to any news outlets.

As a result, it will make you appear more professional, experienced, and makes the process easier on the publication’s side.

Here is an example of a press release to get an idea of the different elements I’ll be speaking about below:

It normally consists of the following elements:

Don’t worry if this all sounds Japanese to you, I’ll clarify all of these below.

Include a high-resolution logo at the very top of your press release.

Standard size is 200×200 pixels, but feel free to use a different size if it looks better.

Additionally, you may need to send the logo as a file over email if it’s requested by the publication, so keep it handy.

On the top right of a press release, below the logo and above the headline, is where your contact information needs to be placed.

Interested journalists, investors, customers, and partners will use this to learn more about your business.

It’s standard practice to include a contact’s name, position, email, and phone number.

The release date of your paper is the day that you wish for it to be published by news outlets.

This can be timed to product launches, events, conferences, etc if you would like.

If you prefer for the press release to be published immediately, you will need to add the following along with the date:

On the flip side, you can choose a specific date for the press release to be written about by adding:

With most of the little technical stuff out of the way, you can now begin writing the actual press release beginning with the headline.

Remember statistically most people read the headline and that’s it.

A great headline is like getting your foot in the door.

It will interest journalists and other individuals in reading the rest of the material.

If the headline sucks, nobody will read the release, and that means no extra business for you.

Here are the four basic principles of effective headlines…

The number one goal is to get reader’s attention.

This means that you can need to write a headline that appeals to the reader’s self-interest or provides interesting news.

You always want to laser focus on a very specific audience.

This can be done right through the headline, so you only attract the most relevant audience.

Continuing off of the e-commerce example, imagine most of your customers were new digital entrepreneurs trying to learn the ropes of online business without investing much capital.

You could include keywords or phrases in the headline like:

Include a complete message

Readers should know exactly what to expect in the press release by finishing the headline.

This means it needs to offer a complete message without any vague or generic statements.

I suggest that you add both your brand name and main selling proposition in the press release headline to achieve this.

Here are some examples:

Draw them into the rest of the copy

You should look at press releases like any other form of copywriting.

It isn’t written to be fancy or creative, but to sell and inform.

If you follow the three proven copywriting techniques, the rest should fall into place.

You will have effectively interested the reader, selected an exact audience, and displayed the main message within the headline.

Remember to include these strategies within the sub-header, as well.

Now it is your job to keep them reading the rest of the release, which brings me to my next point.

Every body of a press release needs to begin by stating the location and date of where the news took place.

This should ideally be bold and separated from the rest of the paragraph via a dash.

I published an entire guide to writing introductions you won’t want to miss if you’re putting together press releases, either.

However, the key to good introductions is using some of the following strategies:

The body of a press release needs to cover the who, what, when, where, how, and why of the story.

Go into as much detail as you can about the topic.

This is especially crucial because many readers will most likely have no previous knowledge about your business.

You want them completely filled in about what you do and how the news is relevant to them.

The body should also include any media that is relevant to the press release. This can be images of a product, event, or new office building, for example.

Similarly, I’d suggest adding quotes from individuals that were involved in the news.

Keep them around 500 to 1,000 words and you should easily be able to sum up the news event you want people to hear about.

The final paragraph of your press release is called the boilerplate. It is typically 100 words long and is a section to talk about your company.

Here you can highlight any achievements, awards, or critical information you’d like readers to know.

Think of the boilerplate as an opportunity to attract leads and increase how many companies reach out to you afterward.

If you follow all of these steps on how to write press releases, I guarantee that you will have an epic press release that publications will greatly consider.

Now that you understand what a press release is and how to properly write one, let’s dive into how to distribute them so they get picked up by outlets.

It’s a fantastic network for finding news and jumping in on conversations, which makes it excellent for distributing your press release.

Heck, there are 500 million tweets sent each day.

You can get in on the action by promoting your press release with relevant hashtags, along with tagging outlets like this:

Additionally, I also suggest that you directly reach out to publications through direct messaging.

Explain who you are, the news story, and ask if they would like to see the completed press release.

There are websites which allow businesses to submit their press release for free or a small charge.

This can potentially distribute your news to a massive audience, which can spiral into a mountain of sales and brand awareness.

Here are some to check out.

You can submit one press release per day for free on openPR.

All you need to do is enter in the press release title, text, boilerplate, contact information, and select a category.

Further uploads will require credits, which you can purchase directly through the website.

Most companies will find the free option to be more than enough.

However, if you plan to upload multiple press releases in a day, then the credits could be a worthwhile investment.

EIN Presswire reaches millions of people with their distribution platform and combines a bunch of services in one to give you a great package.

Currently, there are four plans:

Imagine sending your press release to hundreds of thousands of outlets at once.

Backlinkfy can do that while you kick your feet up.

The process begins by sending in your completed PR or explaining to Backlinkfy what you’d like the release to be about, and they will write it for you.

You will need to submit keywords, URLs, and other information via a simple form.

After choosing your plan, their team of experts will get your PR distributed to some of the biggest outlets like Google News, Fox, and BC.

Backlinkfy also offers a report on how well your news has been approved and reported to see the ROI in action.

Currently, they offer the following plans:

Keep it old school and give them a visit

Everything is digital these days so it’s easy to forget old school methods still work like a charm.

What am I talking about?

Physically visiting publications and giving them your press release.

I can assure you that if a business takes this route, they’re instantly going to stand out among the sea of submissions.

Now it’s not easy to show up with your own two feet and hand a publication a press release if you live in Toronto but they’re in New York, so this takes some research.

I recommend heading over to Google and searching for local news outlets that would make a good candidate for submissions.

The next step is to dress the part. You want to represent your business professionally and give an unforgettable first impression.

Show up in a suit or other business attire and work on your body language. That means good eye contact, standing tall, and walking confidently.

Act as you should be there.

Walk up to the front desk and ask who you should visit to drop off a press release.

They will either take care of it for you or in some cases have you meet with an editor or journalist.

Never leave without giving a business card and repeat this process for as many publications as you wish.

You may also want to consider hiring people to take care of this grunt work.

Final thoughts on how to write a great press release

Writing and distributing a press release can be one of the best things you do for your business.

In the case that it gets picked up by large news outlets, you could be swimming in money afterward.

Here are the main takeaways of today’s article on press releases:

Hey! My name is Carmine and I'm a Toronto Copywriter that's written for Neil Patel, Dan Lok, GoDaddy, and more. I've helped clients generate $100k+ in MRR, 400%+ organic traffic, and 100%+ MQLs. Reach out to me at any time if you need copywriting services.

A Simple Guide: What is Direct Response Copywriting?

Get a free consultation